Today fellow Game Commission Retiree, Billie Cromwell and I traveled to Shenandoah National Park in Virginia for an eventful morning of photographing wildlife. It is a three hour drive one way. We left at 4:00A.M. and were at Big Meadows in the central district of the park at 7:00.

Soon after dawn we found a superb 10-point whitetail buck grazing by the side of Skyline Drive which follows the top of the mountain through the park from Front Royal in the north to Waynesboro in the south. The Big Meadows Area is perhaps the best spot in the park to observe and photograph wildlife as animal and birds are used to humans and do not flee at the sight of them. 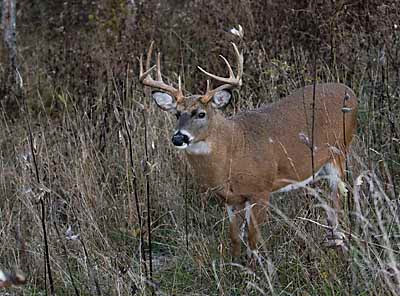 Canon 40-D 70-200mmL f2.8 IS ISO 500
The highlight of the trip was a rare encounter with a Barred Owl along the edge of the meadow. The meadow is a large clearing that lies atop Virginia's Blue Ridge. It is thought it was originally cleared by the Indians. Later it was farm land until the ground was taken to create the park. The Big Meadows complex features a visitors center, lodges, campground, and camp store all of which close for the winter at the end of November or slightly before. 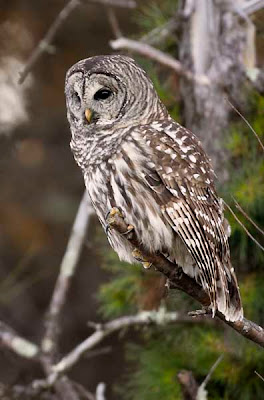 WOW! What a shot of the owl! I have never in my life seen an owl in the wild. This has made my day! She is absolutely beautiful.
Wonderful Wonderful Shot!

Both pictures are stunning... I love the owl... I missed a beautiful male red fox today because I forgot to alter my settings.. I have beeb kicking myself all day. The day before I saw one of our Little Owl, about 7in. high, sat on the roof of a farm out building, we both saw each other at the same time. I froze but contact had been made and it very silently flew away. I'm still pleased as I did get to see them both.

What a classic shot. Very stately looking animal. The barred owl is incredible. The detail and the pose are spot on! :)

I really enjoy your work here because my family used to make an annual trip to the great Indian game sanctuaries.

You re-create the feeling of adventure for me .....

That is a splendid pair of photographs. I really like the barred owl picture; and the other one too, but the owl is something I seldom get to see.

WOW, just tell the deer to stay safe as I travel through your area tomorrow and again Sunday.

Love the owl shot! Can't wait til I can get back out to the forest. I'm not allowed to lift over 5 pounds and my Nikon D200 with a decent lense weighs more than that.

Looking forward to seeing your next entry. :)

Great Barred Owl shot! Love these birds. They're so pretty. We had the fortune to see a family and one day we saw the baby out. He was too cute. If you're interested, I'll show you.

Who! Who! Who's there? Just kidding. Wonderful photo.