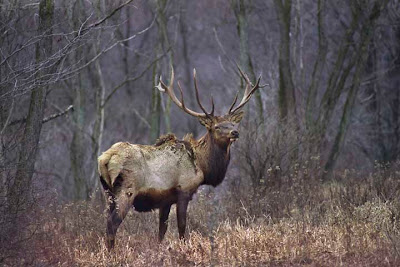 Perk could see the world as he knew it coming to an end as these events unfolded and he was extremely unhappy as the rush toward the first modern day Pennsylvania elk hunt began. As it turned out he was not alone!
Posted by Willard at 8:47 PM

You are killing me Willard! I 'm afraid I might die before I get the whole story! So they polled JUST the people that were out that day? I've got to re-read. Sounds like a poor system. Nice photo...he really looks WILD.

I do think that the Shawnee Forest in Southern Ohio could use a herd or two of your elk if the governor decides he wants to transfer some around.

It was a two-year study, with a total of 904 on-site interviews which were conducted over the course of 78 survey days. The majority of the survey days and data collected was in the fall which is when most visitation occurred.

Nice shots there, I like them, what kind of camera are you using, and lenses?

Love to meet other photographers, and I do a little bit of wildlife work, you have have a look here if you want www.brookewhatnall.com

Keep the info coming Willard... it makes great reading, both the posts and the comments. And the bonus is we all get to see more of your pictures.

Another beautiful picture. I love wildlife photography. Your unfolding story is interesting!

Aloha Willard, Love checking out your blog and reading your commentary... Not to mention your images are AWESOME!! Wishing you a Merry Christmas and Happy Holidays.
Aloha, Renee :)

Willard, do you have any estimates on the PA elk population? And what is the annual tag distribution for hunting? This is starting to sound a lot like Maryland's rush to it's first bear season since the 1950's several years back. As a hunter, I was against this as most of the bears were transient anyway. PA/WVA/VA bears just passing through. Maryland did not give enough time for resident bears to get established. Just my thoughts.
Great photo!!!
MERRY CHRISTMAS to everyone up there!!!

Carl
Merry Christmas to you and your family.

They are maintaining a stable population with this amount of hunting, but the problem is that too many of the bulls are being taken before they reach maturity and they are hunting too close to the tourists areas where most of the elk are acclimated to humans.

I did visit your web site and I like your photography a lot!

Abe,
That's what he should do, if he thinks there are too many in this state. You would enjoy photographing them!

Hunting with a camera... What a great way to preserve and AND nature! Great photos!

Have yourself a great Christmas! :-)