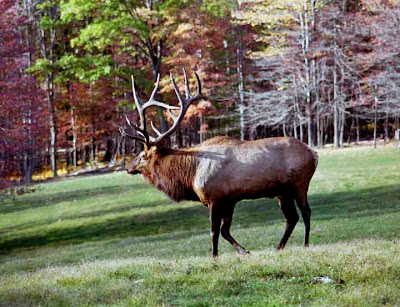 Minolta XE-7: 85-205mm
This bull was photographed in a remote area of the elk range during the rut of 1998 and as best as I can tell was taken in the first modern day elk season held in 2001. This bull never grew as many points as some, but he had an impressive spread which was visible when viewed head on or going away. I plan on showing a head on view of him soon and possibly some video captures.


I was pleased to receive a comment from Jack Manack of Elk County Outfitters. Mr. Manack has established a blog to present the pro-hunt stance. We welcome him to the world of blogging and look forward to reading more of his views.

For those who would like to read a response from a member of the hunting community, please visit the post of Sunday, February 3, 2008 Titled PGC To Discontinue Controversial September Elk Hunt! and go to the comments section.

I am against killing wildlife unless you need the food to survive.

I enjoy these post, and debating them with myself never mind others.. very very interesting stuff Willard, one that will produce comments from both side of the fence I'm sure... I would like to see these big bull go on for years and trophy hunts for the biggest and best stopped. Biggest and best in line is what is needed... it these Genes which need to be passed down and make the herds survive. If hunts must go on.. it should be the weak, and sickly ones that are culled, or accesses in number.
This is not my area or country, but thats my opinion for what it is worth..

The momentum is moving well willard, lets hope it goes well.
I think that you are doing stirling work.Well done.

I find it interesting to see both sides of an issue. Thanks. Your pictures as usual are wonderful.