Mating or "gobbling" season for the Easter Wild Turkey
While spring has not yet officially arrived, here in Pennsylvania a change can be felt in the air and wildlife movement and feeding patterns are changing in anticipation of the warm weather to come.

The migration of waterfowl is now in full swing and the wild turkeys are showing the first signs of the arrival of the mating season or “gobbling season”. The male birds begin gobbling with the onset of warmer weather in March but it is usually sporadic in nature until the end of the month or early April when it intensifies.

I saw the first signs of this today when turkeys came to my photographic blind both this morning and evening. Only one mature gobbler was there this morning, and he was interested only in feeding. 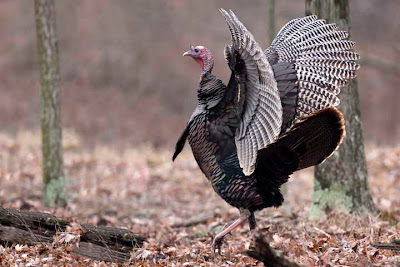 Mature Eastern Wild Turkey Gobbler: Usually only the males, known as gobblers grow beards.
He returned in the evening and resumed feeding, but then a small flock came running to the area with another large gobbler in hot pursuit. His head was swollen and his feathers were ruffled as he aggressively chased some of the other birds. I recorded this activity with the video camera, and then switched to the still. At one point he came quite near the blind, in fact actually too close to get a full portrait shot with the 500mm and there was no chance to change to a smaller lens. Unfortunately, by this time his head had reverted to its' normal appearance. 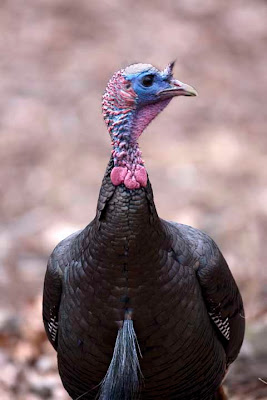 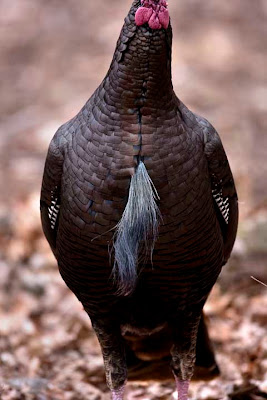 Eastern Wild Turkey Beard: The average long beard is 9-9.5" but some exceptional gobblers may have much longer beards.

Although these shots do not show how mating season affects the appearance of a gobbler, they do show how one looks up close and personal.

Great shots, Willard. Few people have the opportunity to get that up close and personal with a gobbler.

Gosh, what I would give to see a wild turkey land in my backyard. It is possible but certainly not likely. That top picture is really nice. How many times I have see turkeys do that and ducks and geese. I think it must be a stretching exercise or something but it looks so nice when caught (started to say caught on film) by a camera.

There are some wild turkeys around this neck of the woods but I have yet to see them.

I have definitely noticed the birds acting "frisky" lately! A definite SPRING sign.

Glad you captured some shots. I seen some wild turkey crossing the road while I was driving, but I was going around a curve. I figured by the time I could turn around they would have been gone, so I didn't go back.

I linked your blog im my blog
BOA LEITURA:

Hi Willard..
This is a great set of pictures for me to see.. it is the first time I have seen the beard.. I only found out about them the other day so to see these pictures are great.
The heads are something to look at.. more like reptiles than birds..
great captures Willard..

Good shots Bro! They looked good on your camera and even better here. I'll have to join you in the blind soon. It seems since Florida that I have been all shot-out :)

Tom,
It is amazing how the heads can change in appearance at this time of year and rapidly too. I hope to capture this in more encounters, but if not I'll try to post some from last year.

Salty,
We'll definitely have to give it a go. The action should keep getting better for the next month.

Great shots of this turkey. I am hopeing to get some of the sage grouse again this year, but they haven't quite started yet. Thank for sharing. Beautiful work as usual.

Well, now, you got to come back and take a look at me in my new blonde wig.

Willard: I'm visiting from Salty's blog. I really excited about seeing your sight. I grew up in Western PA and love wildlife. Your photography is outstanding. The turkey photo is great. I've only seen Elk in the wild at Yellowstone Park. This is a real treat.

It's the first time I see such a wild turkey.
This is a real treat.

Wow! You really froze the action in that top shot. Unusual to see a turkey in that pose, almost like he's dancing.

I agree with Amy, that first shot is pretty amazing!

I actually saw a wild turkey roaming in Kissimmee, Florida.

Always a pleasure to visit Willard, Love these wild Turkeys.

Willard, Easter greetings to you and your family.

Happy Easter to you and your family!

Wild Turkeys wow! I believed that they did not exist, only that in certain old American films in the cinema! Marvellously she appears, same with domestic!
Very good Easter post!