An Encounter With A Bald Eagle


I posted a picture of a Bald Eagle as part of a discussion on lenses for long range photography with the Canon XL-H1 High Definition Video Camera on DV Info. Net Forum today and decided to post a shot here as well along with some information on eagles in Pennsylvania. 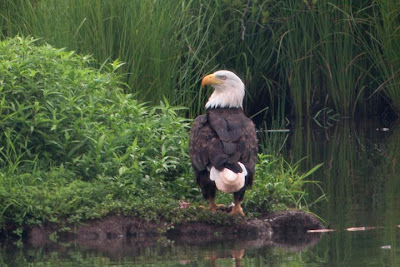 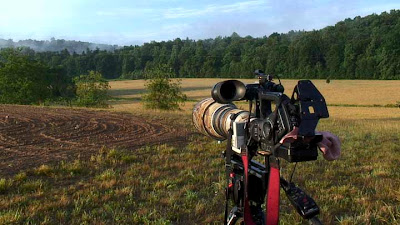 
Eagle populations are increasing in Pennsylvania. I have recorded the birds at Middle Creek Wildlife Management area at Kleinfeltersville, Pa. and at Sinnemahoning State Park, located between the Village of Sinnemahoning in Cameron County and Austin in Potter County. I have seen numerous birds in my home area, but they have so far been too shy to permit me to get the camera in action with the exception of an immature eagle that permitted me to videotape it at long range on one occasion.
Birds have nested in the same area of the lake at this park for a number of years. I was there on the morning of July 17th, 2007. I had a smaller lens mounted and was trying to get a shot of a flying eagle when I saw this bird land on the far side of the lake. I quickly mounted the camera to the 500mmF4 Canon with 1.4 extender attached. This gave me an the equivalent of a 5,040mm lens in 35mm terms. I took several stills in card camera mode and some video footage before the bird flew away.

I hear there is an bald eagle nesting in Fulton county. I saw its nest. Its been feasting on fish from a stocked pond.

Nice shot Willard, One great photographer that you are.

Nice to be back in Blog - Land.

Beautiful Willard.. or all the birds raptors are my favourites. This is a rare viewing for me, to see this through your lens is great. I look that eye, what a cold stare that could give. As soon as I get the time I will read up a bit on these fine birds.
Great Post Willard.
Nice to see you mention a Forum... I ran one for a while for Old Land Rovers and their drivers... more like a virtual English Pub.. it was a great way of getting to grips with your hobby, being in touch with like minded folk and sharing stuff. I found it very helpful.

Great shot! Funny that you posted this right now. We went up to Middle Creek today and happened to see one of the pair of eagles that nests there. It was Justin's first eagle ever! Even with 1,000s of swans and geese around, it was still one impressive bird.

I am so happy for these birds. And I hope they do make a comeback here where I live too. I think some have been spotted but I don't recall just where.

Thanks for visiting and come back again.
My next posts will be written in Portuguese and English!

These are FANTASTIC birds! And you have a Beauty of a Shot with this!!
I have only seen Eagles in the wild one time in my life. I have never seen them here in Virginia.

Beautiful! We have a pair of bald eagles right outside of Ridgway. They stick pretty close to the Clarion and you can see them flying around pretty often.