Ospreys are also known as “fish hawks” because they are fish eaters. Licking Creek borders two sides of our family farm and I occasionally sighted these birds there during the late 1960s and 70s, but never photographed them.

I have not acquired any acceptable still photos with either film camera or DSLR, but I did get close-up video footage of one back in the late 1990s at Meadow Grounds Lake near McConnellsburg, Pennsylvania. I heard a tremendous slapping, splashing sound in the water a long distance away, and saw it was an Osprey diving for fish. I was unable to record that action, but suddenly the bird landed in a tree top well within range of the camcorder and I did capture him sitting there.

Fast-forward to Thursday morning of last week, and I was at Meadow Grounds Lake looking for waterfowl, eagles, and ospreys. Suddenly an osprey landed on the far side of the lake.. It was too far for a decent still with the 40D and 500mm lens so I mounted the Canon XL-H1 Camcorder on the 500mmF.4, which gave an effective focal length of 3,600mm. 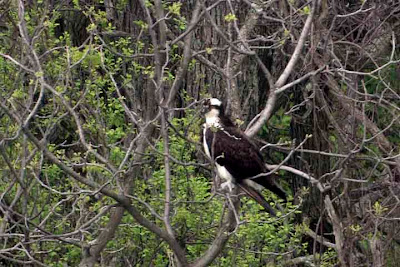 Canon XL-H1 Camcorder: 500mm F4
It looks better if you click to enlarge: you wouldn't believe how far away it was!
In terms of image quality, camcorders cannot compete with DSLRs yet as still cameras, but the gap is narrowing. At least the XL-H1 gave me my best still capture to date of an Osprey.
Posted by Willard at 4:45 PM

Nice shot Willard. I wish I had a 500 mm lens. I am investing them but they cost more than some of my cars did.

I saw a telephoto lens of 500 mm that somebody had with a 2 something converter but I never could find it anywhere. It even had IS image stabilization.

Willard: Very well done, we have Osprey at the lake I fish but they are hard to capture on film. I expect to catch one sometime this summer.

We get this passing over at times but I have never seen them.. they were killed by gamekeepers to the point of extinction but breeding programs have seen them make something of a come back. They are still a rare bird over here.

I have been away from the PC for several days because our new puppies developed PARVO.
I did not want to post sad news, NOW there is POSITIVE NEWS on our Pups.

Talk about luck to get a second chance with an Osprey at the same lake years later. I wonder if they're like eagles with long lives? With as much time you are able to get out I'm sure you'll get that good photo sooner or later.

I know what you're saying about the image quality, but it's still awfully good for such a long effective focal length with a video sensor!

Looking forward to meeting up with you sometime this year. I will be in touch.