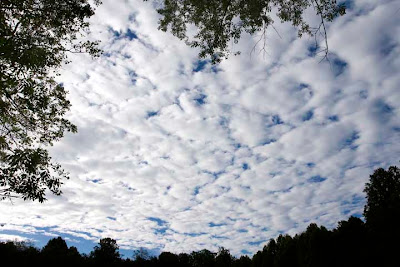 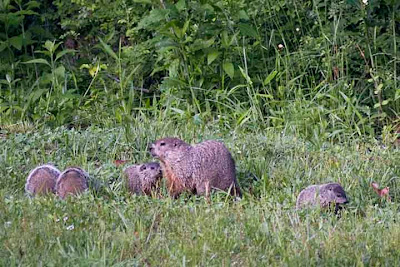 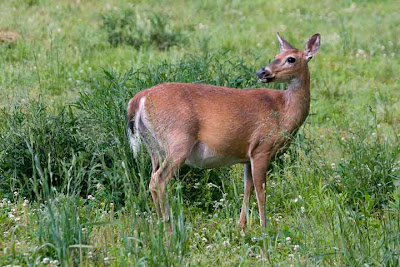 
I hope to be able to post photographs of the newborn soon, but they do not always co-operate. I have seen fawns within a day of when they were born, but sometimes it is a week or more until they appear. (One can tell birth has occurred by observing the doe closely. If she looks like the doe above one day and appears the next with sunken flanks and a smaller abdomen, one knows the fawns have been born.)
For more Sky Watch photographs visit Tom at Wigger's World
Posted by Willard at 9:32 AM

OH what joyous news about the birht, I hope you get pictures.

Your sky is beautiful all of your phots are top notch

OH what joyous news about the birht, I hope you get pictures.

Your sky is beautiful all of your phots are top notch

I can't wait to see the new borns and the black bears you mentioned. The bears are getting closer to me in my area, I have been scouting them out but no luck yet.

These are fantastic shots.

Hi Willard: What a great Sky picture and an interesting post.

What a way to start the day--and in a great place with great company. Thanks for these.

Whatever it takes. These are beautiful, Willard.

So nice the 1. picture was. If you turn it up side down..., it looks like the snow we have wintertime.

so really nice animals to...

Nice weekend to you, from Anne in Norway.

I am so looking forward to seeing your photos of the newborn. Good luck with that!

Those pics are stunning!

Cheers Willard for all these pictures.. I've been on the look out for young ones around here.. mostly birds.
That Doe looks heavy.. I look forward to seeing more from your favourite meadow.

Nice photos! You've worked hard to become friends with the doe. I hope her fawns make it and that you capture them with your camera.

These are wonderful, as usual! The sky looks like cotton. The woodchuck family is cute. I too hope your are lucky enough to get a picture of the young one.

Have a great weekend!

Great sky Willard, hope to see the pics from the birth, lucky man.


My lady and her lamp - are now up and running.

Great Sky Watch!
You are an excellent photographer! :)

Your wildlife photos are excellent as well.

Good cloud photo. Soft, round and big. Good story too, thanks!

Love the puffy whites in the sky.
Your wildlife shots are great too.

Happy Sky Watch!!! I enjoyed your photos, lovely colors contrasting the light clouds and the blue of the sky and some wildlife too.... cheers!!!!!

A Most EXCELLENT post Willard! I just love the skywatch shot.....and seeing little babies (of any kind) is just fabulous!

I have NEVER seen a pregnant deer before.....Wow..she does look BIG!
I hope you get a shot of the newborn fawns when they arrive!

Good luck to mama doe and the
fawn(s).

Can't wait to see the fawn! Let me know when you've got the photos!

I see you've got the groundhog babies, too. I saw a family of these last year. Very cool!

P.S. I'd love to be able to comment on your blog without having to use Blogger. Just a thought to have more options than Blogger. Great blog!

I've been seeing alot of groundhogs lately along the road. That's a spectacular sky photo.