It was one of those situations where there were no other options to pursue. I was returning home Thursday from my almost daily morning photographic shoot when I spied a large hawk surveying a meadow from his perch atop a hay bale. I had the 300mm lens attached and decided to shoot a few shots before he flew, as these birds are quite skittish in this area.

I took a few frames and then tried to attach the 500mm, which was lying in the back seat of the Blazer, but I never got it mounted until he flew away. This is likely the same hawk that killed the rabbit in the previous post, as he was only a short distance from that spot. 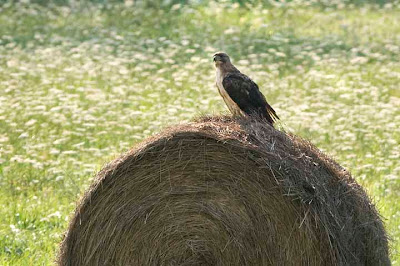 This evening when I arrived at my favorite deer photography spot, I set the 40D up on a tripod and was standing a short distance away with the 30D and 70-200mm lens when one of the fawns came running up to the tripod for a close look at it. Again it wasn't a super pose as I would have liked to have captured a more inquisitive expression on its' face, but still I thought it was special to have the little fellow come that close to the photographic equipment. (Yes, the 40D has returned from repair for the second time and all systems seem to be functional!) 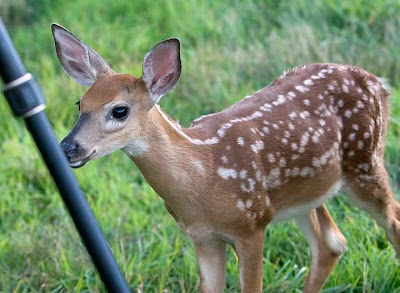 Awwwh! Your photo of the curious fawn is wonderful! Thanks for sharing it. It is an unusual occurrence, and you're fortunate to have recorded it. Love it!

wow, she certainly was brave to come that close!

Maybe not the shot you were after, but I love it! I love young animals (and birds) because often they are not as skittish as the adults and let us have a closer look.

Both of these are awesome Willard!

While the hawk is skittish by nature this little fawn didn't no any better did he! So cute. This one makes me smile.

Very nice photos. I love to watch hawks and eagles. And who can resist a fawn?

Amazing that you managed to get the hawk pic from ground level! But i do love the look on the faun's face! Definitely a cute peek-a-boo look!

i see why a favorite special sandy

I would like to think of them special in their own way!:)
Amazing!
Cheers, Klaus

Willard: Simply amazing capture, you do such great things with your cameras. The mountains you live in give you a lot of opertunity also and I'm glad you share with us.

So that's what a hawk looks like! Lovely pic of the fawn.

Both of your pictures are wonderful but the fawn... oh my goodness, I think I'm in love!

Outstanding. To get that fawn so close. You do have such an affinity with wildlife photography.

I LOVE your photos. I tried getting a hawk sitting on a hay bale before I got my DSLR. I got shots which were very unsatisfactory.

They look pretty special to me! You get the best fawns of anybody!

I think birds have a second sense and know when people are taking photos of them. LOL

Wonderful pictures. Its amazing how close the fawn came up to you... where was momma... my guess is she scolded Nemo for going to close to the humans.

Very nice shots. Glad to hear that your camera is back and well.

Two great captures here. It is very hard to get a good shot of a hawk. This one looks like its posing for you.

Hi Willard...
Just playing a spot of catch up before the madness of Sky Watch starts... this post and the fawn post below have been my highlight of the afternoon... I was also able to see these while Jane was sat here and her reaction to the fawns was everything you would expect from a town girl..ha!. many ah! and 'how cute'... excellent posting Willard.. I hope this visit finds you and your loved ones well.

Ah, brave and curious little fawn! What a capture indeed!

The hawk on the hay bale is a nice shot!