The early morning sun breaks through the clouds on Monday morning August 18th, and illuminates a herd of Pennsylvania Elk Grazing in a meadow by the side of Winslow Hill Road. 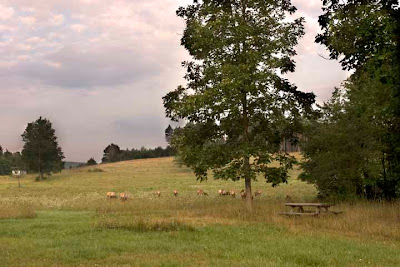 This is an exciting time of year when the bulls shed their velvet and clash their antlers together in what is known as sparring. While they may spar at any time of year, it occurs more often now and is more violent in nature. Soon it will escalate into serious fights between mature herd bulls, but for now it is more like an arm wrestling contest between humans with little to no chance of serious injury.
The mating season or rut as it is known will begin in early September and grow more intense toward the middle of the month, reach a peak toward the end, and then abruptly crash. That period is the most exciting time to visit Pennsylvania's Elk Range.

These bulls were in the village of Benezette at 6:33 a.m. on Tuesday morning. 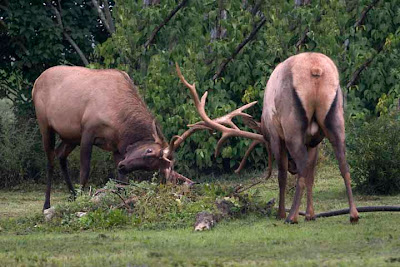 The best chance of seeing elk is early morning and late evening and high ISO speeds and low shutter speeds are often required. Even though I had to use lower shutter speeds than I would have liked I did get a few relatively sharp frames. 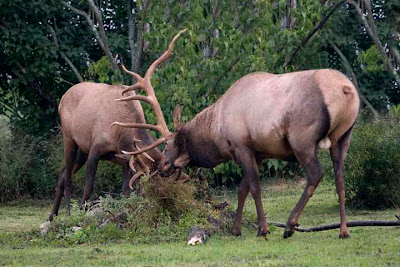 Canon 40-D: 70-200mm f2.8L 1/125 sec. f2.8 ISO 1600
I was in Elk County from Sunday Afternoon until this morning, looking for photos and video footage such as this and finalizing some details about the film on Elk. After reviewing it with Ronald Saffer and discussing details with others I have decided it needs only minimal revision in the final segment and so will soon be completely finished.


For more Sky Watch Photos click the sky watch icon at the top of the page. To see more photographs from Elk County, Pennsylvania visit Brad Myers, an excellent photographer who recently visited Pennsylvania's Elk Range for the first time.
Posted by Willard at 3:18 PM

I like the photograph showing the field with the herd of elk. It has a nice ambling feel to it.

Nice catch for SWF! In the sky, there is no distinction of east and west; people create distinctions out of their own minds and then beleive them to be true. Mine’s up too hope you can drop by… Happy SWF!

The field photo is really nice. The others are too, Willard.

Willard, what great captures. I need to get out this time of year in hopes of capturing this and more importantly just watching and enjoying it. Rest assured I will visit more often.

I had more luck in the evenings than I did in the mornings when I was there. Lots of whitetails in the mornings. Not complaining I am happy to see anything.

I hope you are back to posting again, I enjoy your great shots and your narratives are very infomative, I have learned alott.

to think I lived in PA my first 23 years, and never saw an elk. that's a downright shame. Your Pictures are beautiful.

The sky picture is wonderful. I like the lighting in it. The sparring bulls? Well, it's fine, but I don't look forward to injuries they might sustain later when they get serious about it.

Those guys play rough, don't they? I really enjoyed this post - I've never seen elk in the wild! Thanks.

As always - Wildlife images of the best kind! And a good SWF!
Thank you for sharing!
Cheers, Klaus

Wonderful images of the elk! I couldn't help noticing the picnic table in the first image. Would be nice to sit and watch the elk if they would cooperate.
Congrats on the video coming to a conclusion - thirteen years is a long time. I wish you much success.
Thanks for the comment on my deer photos today along with my Sky Watch - as you predicted for me mamas and fawns have finally shown up this week. I'm posting those for Camera Critters on Saturday.
Have a wonderful evening Willard.

Your photos are beautiful! I love the Elk! You took some fabulous shots! Great job!

These are such great shots. You must have been thrilled to get those sparring photos.

Thanks for the information. I wonder if it all holds true for our Roosevelt elk as well. I need to spend more time watching the herd at Wildlife Safari I think.

Willard: Another amazing trip to the PA hills with a wonderful view of the Sky over the mountains.
I saw two Eagles over the lake and couldn't get a photo but it's in my mind forever.

Great shots of the Elk sparring! Thanks for sharing!

Love the well nourished elk with their great antlers. They do look so splendid. Their habitat is so gentle against the urgency of the serious business.

Hi Willard... thank for joining in this week.. I think those that know you are aware now of how busy you have been... I ad other will appreciate you taking time off to do this post... beautiful pictures and neat info s well..
Hope all is well your end and the final section of the video is near completion..
Tom

WOW fabulous photos of the elk fighting. This is also my favorite time to view the elk in rocky mountain nation park.

Great Photo - Please stop by and check out my blog. Iowa Nature Photos will now be a photo blog with no caption or commentary. I do not have the time to dedicate to my blog that I have in the past but would still like to post photos. I hope that you will continue to support my blog in the future.

I love the soft colors in your skywatch pic!