Camera Critters: The Thief Cometh To Kill And Destroy

The thief cometh not, but for to steal, and to kill, and to destroy: John 10:10 King James Version

Looking back upon the events of the past two weeks of the Pennsylvania rifle deer season, I couldn't help but think of a portion of a scripture verse and reflect upon how accurately it portrayed some of the events that took place.

It all began with the loss of the adult doe featured in last weeks Camera Critters post and gradually escalated until events reach a climax yesterday afternoon. During the course of events a beautiful fawn such as the one pictured below was shot through the head. 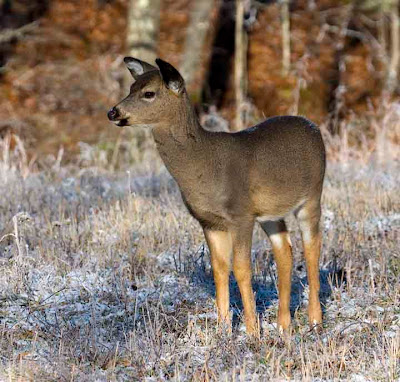 It was within plain view of the public road, which passes through the property, and was quite close to it. There was no chance that the shooter did not see the animal fall. It was a classic case of wanton waste (simply shooting the animal for spite, or the depraved joy of shooting it just to watch it fall). I do apologize for showing such an unpleasant scene, but I do feel it is important to show what some individuals are capable of doing. 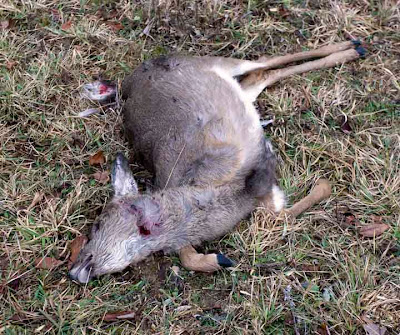 This is not the same fawn as shown in the first photograph, but it was one of the same herd. I cannot find a good photograph of this animal while it was alive, so I substituted a photo of one of its' fellow herd members.

I have found where at least one other deer was shot and removed from this property illegally. Fortunately, I was on the scene on Friday afternoon when road hunters came to the area again.


Thanks to a prompt and efficient response from Pennsylvania Game Commission Conservation Officers and The Pennsylvania State Police, the violators were quickly rounded up and now face substantial penalties. At some point in the future I will share the events of that afternoon with you, but I must wait until the case clears the judicial system before doing so.

Sadly, I am convinced that they are not the only wildlife criminals causing problems in this area, and the herd of whitetail deer, which are featured often on this blog, still face a great deal of danger.

The fawn pictured today was discovered while engaged in apprehending the violators on Friday. This particular deer was not killed during that violation; however, but had been killed previously.

Ethical hunters and non-hunters alike, despise the acts described here, but unfortunately there are a substantial number of persons out there engaged in this type of activity.

It's not an easy thing to share Willard but at the same time it needs addressed.
I'm glad you were there on Friday.

How sad and it make one reflect on the ethics of people. This story reminds me very much of over a 100 years ago when people elimanted the bison herds for no good reason. I wonder what goes through the minds of these people...do they have minds?

Joan,
You raise a very valid point. I have often pondered this point too, and I can only conclude that they are "wired" completely different than most and I don't see how they give serious thought to any subject.

This is just so terribly sad, especially for you and he work you do. This really makes my blood boil.

It is a sad story but true all to often here in rural Pa. It is one that angers me. I take animal cruelty very serious. I for one am an animal person and not a people person. Killing for the sake a killing is very wrong and unfortunately I don't think the punishment is severe enought.

I am not against hunting, I was raised in a hunting family and hunted for years. I have never felt the herds were managed properly in this state and don't see the wildlife in my area like I did growing up.

I don't have the answers to these problems but am glad that their is people around like you and Salty trying to keep these people honest.

Posts like this make me want to head back to VA and come out of retirement. Sounds like you were a help in resolving the caase. Good for you! Look forward to hearing the details in the future. Blue Skies.

How awful! There's no excuse for this. Hunting is necessary to keep the herd at a manageable number, but to kill just to kill. I'll never understand that. :(

Willard, I can't even imagine how anyone could get a thrill from causing pain and/or death for another creature, especially as beautiful as this. Thank you for all you have done and still do for our beautiful wildlife.

This breaks my heart and infuriates me! Believe it or not, I actually support ethical hunting and hunters who follow the rules and use the animal they take as a food source. This however - there is nothing ethical about this! I am SO glad to hear you were able to at least put a stop to some of the violators.

This is very unfortunate and is not very different from Poaching (which happens in India as well). These violators should be given the most severe punishment as possible. I will wait for your post on the details on how this happened...Thomas

Willard, "wired different" says it completely..I so dispise seeing things like this happen. such a waist... thanks for sharing this story..

this not only saddens me, it angers me as well. i'm afraid the penalty will not be high enough for those that were caught, but maybe if sever enough it will serve as an example to others and deter future such actions.

This angers me too! I was once married to a hunter, and we ate deer meat all year. I also know of him tracking deer after shooting them and they kept going, one time for hours. But you never leave one on the ground, you never shoot from a vehicle, and NEVER a fawn.

It's difficult to understand why people are so cruel. Personally, I don't understand the need in our culture to hunt and kill deer.

Substantial number for sure!

How well I remember the days working law enforcement with the “robo” deer during the deer seasons. Set in the right place, nearly hidden along a back country road, it usually didn’t take long before a poacher would stop and shoot at the dummy deer.

It's sad to see what people are capable of doing. The person who killed the deer was indeed trying to kill an aspect within themselves. I hope they resolve this dense issue within their psyche sometime soon.

We take care of the surrounding ranch's hunting rights and every deer season my husband gets ill...the poachers are more brazen, they have no respect for anything or anyone...and it doesn't stop with just deer season anymore. I think until someone respects themselves, they aren't going to have any respect for anyone or anything else and that is a very sad comment on our society.
On a happier note...your pictures (other than the dead fawn)are gorgeous. Thank you.

This is such a sad story. I agree with others that I just can not understand why people would do this. I hope they get whats coming to them. Nice job catching them...

"Wired different" for sure. One wonders how messed up other aspects of the culprits' lives are. I hope their punishment is severe.