On Tuesday The Pennsylvania Game Commission released the proposed hunting seasons and bag limits for the coming year. The Commission will accept public comments on these proposals and other Board actions between now and the next meeting of The Board Of Commissions on April 20-21st.

To view the entire list of proposed seasons and bag limits read News Release 013-09 on The Agency's website.

Bull 62 and Harem Near Gilbert Viewing Area:10/2/08
An increase of four animals does not sound like a lot, but the important decisions have yet to be made. As of yet information has not been released on how tags will be divided between antlered and antlerless elk, or what the allocations for the Hunt Zones will be. 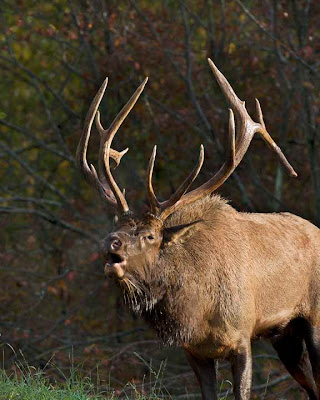 Bull 8A At Pond-Gilbert Viewing Area: 10/1/08
Will The Agency continue to target the animals that frequent the viewing areas on Winslow Hill? Will there be action to further reduce the No Hunting Zone? Only time will tell!

Can almost hear him!

It is wonderful to see a herd together like that WIllard and it seems a pity that they should be hunted at all, but I guess they know what their sustainable numbers are.

In the 2nd photo - I feel like I could hear him bugling. Magnificent shots!

Beautiful image !! Myself I dislike this hunting thing but they must have their reasons for increasing the number aloud kind of sad to me !!

Wonderful photos. I can see why you quit your job. There is just so much that can be upsetting. One wonders how conclusions are arrived at. I hope whatever the conclusions are, they are the least detrimental as possible to the herds.

Both images are beautiful. The first one of the herd in the habitat is extra special

Willard: Let's hope they are doing the right thing.