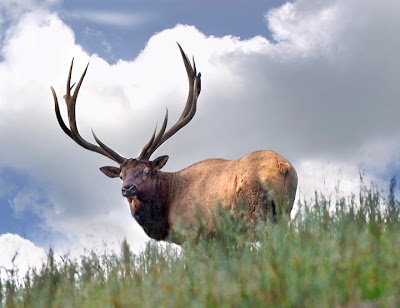 No wonder it was selected for the cover! What an animal, and what a photograph!

I am sorry that another one is gone.
Congratulations on getting the cover shot!! What an honor!!

Congrats Willard!! Well done!! That is a magnificent creature. They seem so stately and proud. I hope you had a great vacation.

Wonderful photo of the bull looking at you. Glad you had the chance to catch such a great photo of the handsome fellow before it was too late.

Can see why you got the cover and a month. Great photograph.

Excellent Photography, Willard. You deserve all the attention your work can get and a calendar is a good place to begin getting it.

What a shot. Great work!

Congratulation Willard, it is just one of many great photographs you have taken that could grace the cover.

I am always looking forward to your next post and what I can learn from them.

Willard: It is really nice that your great volume of work with the Elk is recognized. I enjoyed your DVD's so much and am glad I got to share your love of the elk herd in PA.

It surely deserves to be the cover page. What an awesome composition!!!