In a news release dated February 11, 2009, Yellowstone National Park Officials announced the accidental death of Bull #6 on Sunday night, in Gardiner, Montana, which is near the northern border of the park. He was perhaps the most famous bull elk in the park. The full story appears on The Yellowstone Park Website. I was fortunate enough to photograph this bull during our trip to the park in late August, 2008.

According to the press release:

"Montana Fish, Wildlife, and Parks staff members believe the animal tripped while trying to cross a fence and somersaulted onto his back, where he was pinned between rocks with his antlers beneath him and suffocated."


In the photo below he is standing on a travertine terrace near park headquarters in Mammoth Hot Springs. Although not plainly visible in this photo, he had a small orange tag with the number six on it, in his left ear. 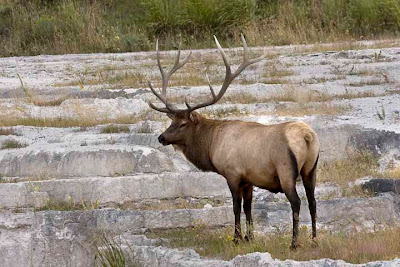 Bull# 6
Park Officials believed the elk was at least fifteen years old. His antlers were cut off during the rut of 2004 and 2005 to reduce the risk that he would injure persons or damage property. He was known for "horning" vehicles and chasing unwary tourists. 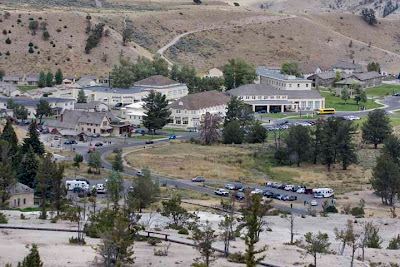 Mammoth Hot Springs-Park Headquarters
During our visit, the rut was already underway and park rangers were exercising tight crowd control to keep the tourists and the elk separated. Persons are required to stay at least 25 yards away from most animals and 100 yards away from bears and wolves. 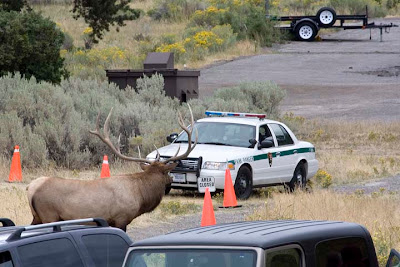 He was relatively calm on this day, but this can change in an instant. I have not seen a Pennsylvania elk attack a car, but one can find several video clips of Yellowstone elk doing so by doing a Google search on the subject. In addition, I do know a fellow Pennsylvanian that was chased by him some years ago--and NO! it wasn't me!
Posted by Willard at 7:30 PM

How sad that he passed on like he did. Being that he was 15 is pretty spectacular in itself. That is very cool that you have pictures of this particular bull. He is a monster! Thanks for sharing!

What awful news. It's a shame someone couldn't help him. Thank you for making us aware of it, and for sharing your photos of him.

What a pity when one of these favorites die Willard. I have just receieved new that one of my best elephants died too and I want to put something on about him tomorrow. Both animals will be sorely missed.

I agree such a pitty when a thing like this happens there are so few of them left such a beautiful animal !

I'm sad to hear of the death of this magnificent and majestic elk! Glad you got to photograph him (and that you weren't one of the unwary tourists that he chased!)

I have seen this bull during my travels to YNP. Saw the poor fellow the year the cut his antlers off too. Bizarre circumstances that caused his death. Thx for sharing. Blue Skies.

How very sad that such a beautiful animal passed out of this world in such a way. Thankfully you have taken these wonderful photos of him to remind us all how truly magnificent he was.

Willard: He led a good life for a lot of years.

Mike and I were in Gardner and Mamoth a little over a week ago and the wolf packs had been killing elk and bison right down the road from your last photo(at the low spot just before the bridge) I wonder if their being there had anything to do with this big guys death, they sure had an impact on the wildlife that is usually around this time of year.. way to close to town, but I guess if that is where the herds have found refuge, then the wolves will follow.. great photos Willard. Thanks for sharing

Great post Willard, I was on vacation last week and received a phone call informing me of the accident. Without my hard drives along I could not make a tribute post but now that I am home one will follow soon.

I can't remember if I heard this through Salty or Brad Myers. It is hard when you have seen the same one from year to year. I am sure it will feel odd when you return next time.