I spent most of the past week in Pennsylvania's elk range. The main object of the trip was to photograph bulls shedding the velvet. Previous' elk photography expeditions had been quite successful , but the weather turned stifling hot and humid with a lot of overcast skies and rain for this trip. and It seemed at times that the elk had literally vanished from the face of the earth.

Noted elk photographer Ronald "Buckwheat Saffer" stopped by soon after I arrived and said that prospects were not good as he had not had many photographic opportunities in the past week. Also most of the mature bulls had already shed the velvet, so the chances of documenting this activity were not great.

I also got to meet fellow blogger, Bradley Myers of Bradley Myers Photography, and his son Shane. We shared some adventures together, which I hope to write about in the future. Stop by Brad's blog as I'm sure that he will share some of his photos and experiences from the trip with you.

On of the more productive encounters didn't involve elk at all. Wednesday morning was very humid and overcast so I returned to the house before 9:00a.m. to catch up on some photo editing, but suddenly I recalled reports of Osprey sightings at a small backwoods lake about ten miles from Benezette and decided to check the situation out before settling down to the computer work. When I arrived, I found one of the birds sitting in a grove of dead trees. 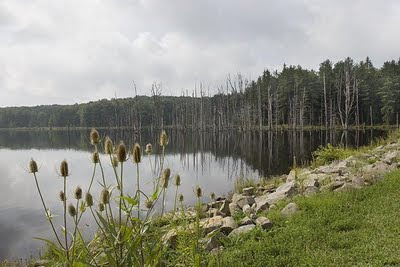 After videotaping him from long range, I exchanged the camcorder for the 500mm F4 and DSLR. As the range was quite long I used the 1.4X and the 2X extenders (not stacked together), to see which gave the best results. In addition all of the photos are severely cropped. 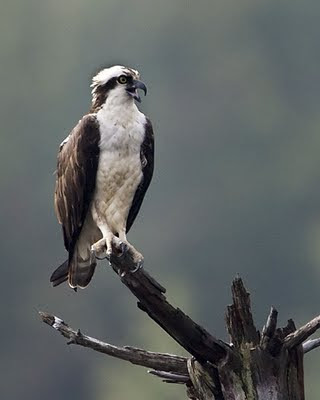 I spent almost an hour, trying to capture the bird in interesting poses. I would have liked to have photographed it flying, but that was not to be. 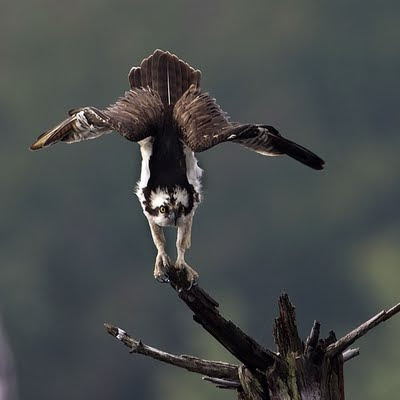 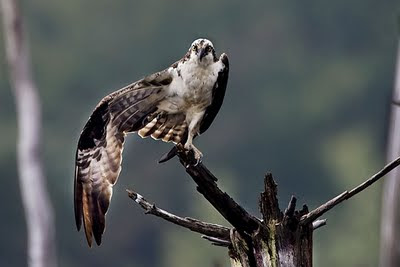 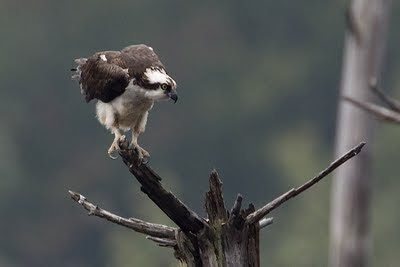 1.4x Extender
I have not had a great deal of success with the 2X extender with the 500mmF4 in the past, but I realized that most of the negative experiences had been with the Canon 10-D and under less than ideal conditions, so that some of the problems may have been caused by subject motion, or lighting quality that was not conducive to resolving fine detail. In this case the subject was easy to focus on and the light was relatively bright enabling the use of higher shutter speeds. All in all I was pleased enough with the results that I hope to use the 2x more in the future.

Wow Willard...I think these are some of your best yet! I'm thinking that Osprey was doing a bit of YOGA :)
Absolutely fabulous shots!

I agree, if that's not osprey yoga, then I don't know what is. The second shot made me laugh out loud.

That one where he's just about to land on the branch is outstanding!!

My C C is posted....it's Tahoe this time, getting into trouble....again! Come by for a visit, won't you? You need to scroll down below my Saturday's photo hunt to view. Happy day wishes sent your way.

What a funny shot, like a person doing a handstand! So glad you went out again and found the osprey.

Wonderful shots, Willard. I have to say that all this talk about lenses and extenders makes me want more camera stuff though. :)

can;t get any more unique than #3 sandy

I love that second shot. What a stance!

Beautiful shots! The second shot is hilarious and the eyes look just like that of my little female cat -- big and yellow and just that expression.

Willard,
I posted an osprey this week too...but your photos are way better!

My Camera Critter is at
East Gwillimbury Wow

Wonderful shots Willard, great capture all of them.

Great captures Willard, I think this is the area we explored last year that I was mentioning, it looks like it. I almost went there the morning it was raining so hard but did not want to get my gear wet.

It was great meeting you. Even though we did not see many Elk we both had a great time just getting away and seeing some Elk, turkeys and whitetails. Thursday morning was all the excitement I needed and I am just glad it ended well.

You will see me during the rut, I have checked my calendar and will be making reservations on Monday. I will email you with the dates I will be up.

Thanks for showing us some spots and I am looking forward to the next trip.

wow I can not believe that, magnificent pictures!
Happy camera critters
purrs and love
Luna

Well captured... I'd love to see one of these up close, even better to see one in the act of catching a fish. Great captures and a great posting.

Since I can seem to link back to my new home, I will post it here; www.itsmynaturephotography.com/blog. The link-back is to my now inactive blog.

Amazing photos. So crisp and clear! I took one of an Osprey flying at the river the other day, but it's not as close as your photos!!
Any sign of Fred during your trip to Benezette? Of course, I had to ask!
Thanks for sharing these wonderful photos. Also, I've never been to this area. I'll have to find out exactly where it is. It looks beautiful.

Congratulations on this series Willard. Some of the first bird images I have seen on your blog and they are cool.

This beauty seems to be miles away... well shot and beautifully composed.

Well, you know I have been a fan of yours for a few months now, but now I'm a HUGE fan! Iloved that Osprey shot with the handstand! Incredible capture! Seriously amazing!

These are spectacular. Flight would have been great, but I love the one with its wings in the air and feet on the branch.