We continue today with more photos and commentary on the elk trapped in the swings at Benezette School. For more detailed reporting be sure to visit Bradley Myers Photo Blog and his son, Shane's Blog.

I must confess that I do not know the full name or exact position of the first Pennsylvania Game Commission employee on the scene, but I have heard him called Mark and know that he works with the biology aspect of the elk program. To use legal terminology, on or about 08:15 Wildlife Conservation Officer, Doty McDowell arrived on the scene. He is the law enforcement officer assigned to that portion of Elk County. Only certain PGC employees are permitted to use the tranquilizer gun, which was why we had to wait for WCO McDowell's arrival. 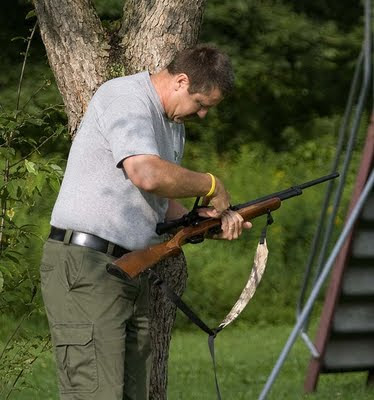 
Sometime about 8:25 he assumed a shooting position by a nearby tree, took careful aim, and fired. I have not witnessed a darting before, but have worked for several officers who have done it extensively. Perhaps the technology has improved and things are more predictable now, but I have been told that there is a lot of potential for things to not go exactly as desired. In this case everything went well. I did not photograph the actual firing as I was concentrating on operating the camcorder at this time. 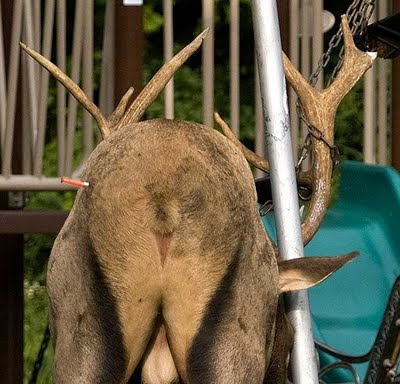 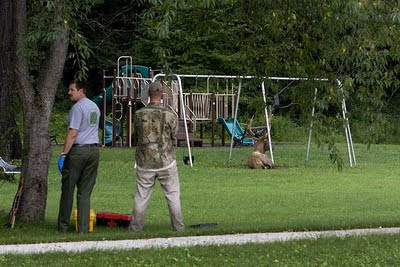 Waiting for the drug to take effect 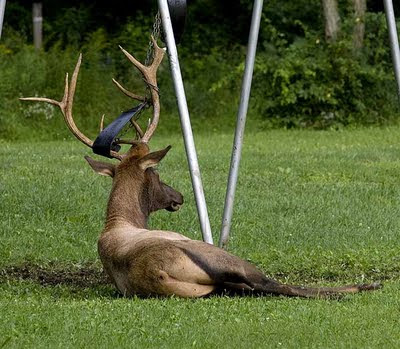 
The critical part of the mission was now accomplished and all that remained was to remove him from the chains, and deal with the damaged antler. Hopefully I will post some photos from the conclusion of the incident tomorrow.
Posted by Willard at 8:31 AM

What an awful and scary thing to happen to this bull. I'm thankful he is OK. They should remove the swings, I never see anyone using them. Thankfully, someone saw it and reported it.

Poor elk! So glad he had good people who knew what to do. Thanks for documenting this dramatic rescue, Willard.
Waiting for tomorrow's post!

Willard: Neat shots of how the wild animal needs help when dealing with people.
BTW: Check out the young buck that came into my yard.