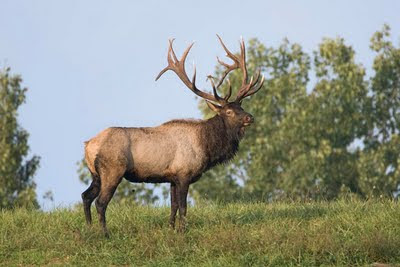 9x8 Gilbert Viewing Area: Evening of September 27, 2009
I recently received a copy of a letter from Jim Borden of Borden Custom Rifles. Mr Borden wrote this letter to a Mr. Jacobs of WNEP PA Outdoor Life concerning a program which they broadcast last year.

Here is the letter published by permission of Mr. Borden:

I am writing to express my concerns with any publication of the Pa Elk Hunt. I grew up in Pennsylvania as an outdoors man and hunter and hunted for 45 years. All of the game I hunted was done fair chase and for animals that were wary of humans. The elk hunt in Pennsylvania is a disgrace to hunting. The PA Elk are not wary of humans and can be easily approached at all times of the year. The video broadcast on WNEP PA Outdoor Life last year would leave hunters and non-hunters alike concerned about calling the Pa Elk hunt a "hunt". . It was easy to see the elk were not afraid and it was like shooting cattle on a farm. This type of publicity does hunters no favors and in fact harms the impression that the general public has of hunters. The Pa Elk Season is NOT fair chase hunting. Bull Elk #47 has been reported as being killed. He walked up to "hunters" and "guides". Furthermore, on Gray Hill on the first day it has been reported that a group of 20 hunters approached 10 bulls together. This is very sad and I hope that you no longer use Pa Outdoor Life to advertise, promote or report on the hunt as a hunt.

My wife and I enjoy traveling to the Benezett area to view and photograph the elk. In all of my visits there over the past two years it has been apparent that the elk do not have normal wild animal fear of humans. Many of my hunting friends and clients share the same views.

Lets keep hunting as hunting and shooting as shooting.

My thoughts on the situation:
There are more aspects of this situation than can be discussed in one blog post or several. In fact this subject has been the basic reason for the existence of this blog and its primary focus, although of course I like to pursue the discussion of other species and subjects. I will concede that it is possible that a fair chase hunt may be possible in the areas well away from Winslow Hill, Gray Hill, etc. I do not know! I ordinarily do not go afield in these areas and at present do not have experience there, but I do have more experience than most with the elk in the areas we are primarily concerned with.

We will pursue this subject in more depth in the very near future, but for today's photographs I will post a series of photos of the 9x8 that was killed in the Devils Elbow area. This animal was shot in elk hunt zone 2 on the first day. It was only a short distance from the Dents Run Viewing Area.

In this case the animal was photographed during the peak of the rut and persons were able to walk about freely in front of him. All of the persons involved were seasoned outdoorsmen and did not intrude on the animals personal space so as to cause him to alter his behavior. 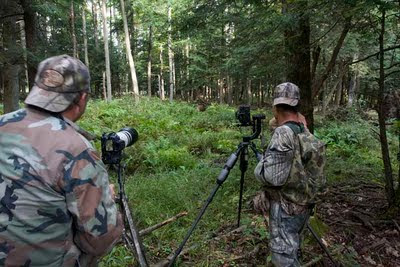 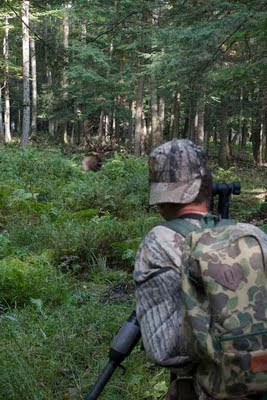 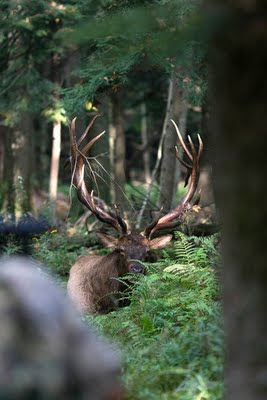 70-200mm at 200mm: Note photographer's out of focus shoulder in lower left of photo

It appears from reports and photographs that we have received that this animal spent a significant portion of the last few days of it's life lying in the lawn of a nearby Bed And Breakfast. One of the persons staying there photographed the animal extensively on the Friday, Saturday, and Sunday before elk season and noticed that two people spent a lot of time along the border of the property and appeared to be watching the elk closely. The animal did not appear on Monday and the person wondered why it did not. As I understand it, the bull was killed on State Game Lands quite close to the property on Monday morning, the first day of elk season. It seems likely that the persons seen observing the elk were the hunter and his guide.

We try to be fair and will permit persons of opposing viewpoints to comment or they may submit longer articles to be posted. The only requirement are that they must state their actual name, the tone of the article/comment must not be offensive, (no name calling), and must be an intelligent discussion of the issues.

In this vein, we especially invite a response from someone who can present a good ,valid reason that we should be shooting the trophy bulls that are acclimated to humans in the Winslow Hill, Gray Hill areas.

I am also interested in hearing a response from someone who was involved in the incident on Gray Hill on the first day, that can explain this incident in a manner that addresses the ethical and legal concerns that the situation seems to raise.


*Note: that I am not promoting or endorsing approaching these animals closely as the unexpected can always happen.
Posted by Willard at 7:20 PM

Willard: So well shared with a expected view on animals that have too much human contact. The deer in my back yard are more wary than these animals.

As always Willard, you have a fine way of stating things. I have expressed my views on this situation repeatedly and will work with you or whoever else out there that may be collaborating to get the facts out there and a change made. Please keep up the amazing work, we appreciate what you do!

Great work, as usual, on informing us of the elk happenings. I do enjoy your writing and photographs. When I cannot be there on the elk range in person, I can keep my soul there by reading your blog and viewing your magnificent photos! My dad and I will be up for bear season and I will definitely be totting my camera along. Then my son and I will be up for deer season, too. Any time we can spend on the elk range is alright by me! Will you be up anytime soon?

Your conservations efforts through your blog post is simply amazing and thanks to your posts we can follow the Elks in the area. Your illustrations and images are beautiful Willard.