As our "Where's The Elk ?" saga continues ,we take a look at a famous character bull, and one of only three truly large bulls that I saw this year.

I first saw ‘Fred’ in 1997 when he was a small but beautiful raghorn. Billie Cromwell and I were videotaping a large bull in front of us when we heard a piercing bugle directly behind us and very, very near. We turned to find a beautiful, young bull. At first we were somewhat nervous, but then we realized that he was no threat whatsoever, but was simply following the action in front of us and staying out of reach of the larger bulls.

I didn’t know his name then but learned it next year. This was well before the Elk Season began in 2001 and most of the bulls on Winslow Hill were named, many by Claude M. Nye (Dr. Perk). There was a famous monster bull known as Fred who was gored by another bull in 1995 and had to be terminated. Dr. Perk named the young bull Fred Jr. as he was supposed to be the son of the original Fred. Another group of people called him “Dog Rope” as he had a dog leash tangled in his antlers for some time. He was photographed with the leash in his antlers . One of my favorite Pennsylvania Elk Photographers “Buckwheat” still calls him “ Dog Rope” to this day.

I was shooting video exclusively at that time and have no still pictures from that period to post.

Eventually Fred Jr. turned into a tremendous bull. Most would call him a “trophy” bull, but I dislike that term immensely.

The PGC Elk Biologist at the time said that naming these animals was demeaning to a “magnificent game animal”, but they thought nothing of fitting them with bright yellow collars with large black numbers. This is done to track them with radio transmitters and study them, but it effectively ruins the animal for videotaping purposes. Before the days of computers this would have been an equal problem with still photography too, but thanks to Photoshop those collars can vanish quite easily.

Fred spends much of his time in downtown Benezette and is quite easy to approach so at some point in either 2003 or 2004 he was tranquilized and fitted with a collar. He then officially became Bull Number 36. 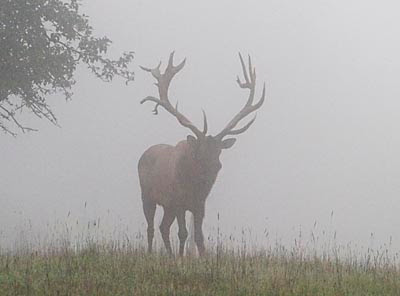 Fred at Gilbert Viewing Area
Most September mornings in Elk County are foggy. This was one of only two times that I saw a bull at "The Gilbert", an area which is usually the center of activity. 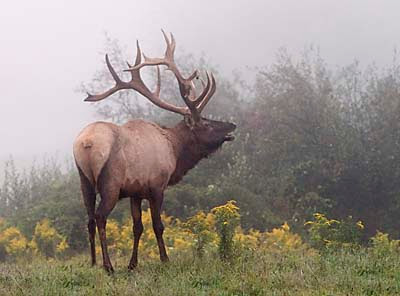 Collar and roadway removed in Photoshop 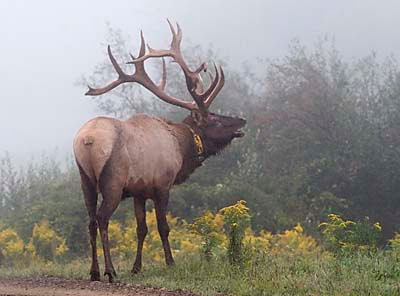 It is said that in 2006 the boundaries of the no hunt zone were changed so that his home range would be in hunting territory. Some made the accusation that this was specifically done to target him as he was now of advanced age and would shortly go “downhill” so he should be taken by a sportsman while he was still a “trophy”.

Interestingly this change was buried in the hunting regulation book in such a manner that one had to read it extremely closely to realize that this had happened. Concerned citizens did not discover it until sometime in September.

This caused a firestorm of protest. Outdoor writer, photographer, and elk activist, Carol Mulvihill, was among those instrumental in pointing this change out. PGC director Carl Roe responded by pointing out that the boundaries would be changed back to their original status, but that he was still concerned about “habituated” elk.

It amazes me how many people travel to Benezette, primarily to see "Fred" or "Freddie" as he is also known. Many who hunt other species, or perhaps would even hunt elk in more remote regions of the state are completely turned off by the idea of Fred being shot.
If Fred is unlucky and is taken in season, I cannot comprehend how the “lucky” hunter will be able to portray this as a fair chase hunt. This bull and his tolerance for humans is known to a staggering number of people. I don’t think the man who kills Fred will win any “Person or Hunter of The Year Awards” and the rack should not be considered for the Boone and Crockett Record Book, as there is no way that the hunt could be termed "fair chase".

I'm with you 101% on this, anyone you shots this fine animal is below contempt and should be made a laughing stock at in hunting circles.
What a beast he is, and long may he live.
Stunning post and pictures, and well done with the alterations.

Well, I gave up hunting a long time ago and also fishing. I refuse to listen to arguments in favor of killing anything. Especially for "sport."

A beautiful animal and the photograph is extraordinary.

How sad if this beautiful animal were to be killed.
Wonderful shots!

They look so strong with those antlers.

Good elks! If you're in NC, be sure to go to Cataloochee. I was there last month and got some great elk shots. They were brought back in several years ago and they've got the collars and ear tags.

death is part of life. whether it comes by bullet/arrow/or naturally. but i'm betting the bullet/arrow will be quicker and less painful than a natural starvation that could last months for an old weak elk.