For those who requested it, here is the Black and White Version of Friday's skywatch post. This was done by a technique disclosed by Scott Kelby in "The Photoshop CS2 Book For Digital Photographers. This involves using the lighness channel rather simply converting to grayscale.

He describes several more interesting techniques, but I went with the first one. 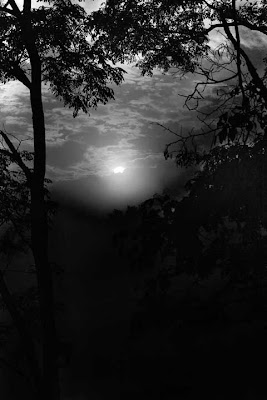 "Salty" of Country Captures and I were discussing Friday's skywatch post on Saturday evening and he touched on a theory which we discussed in detail.

When I checked the blog that evening, I was amazed to find that Jim had responded to a previous comment, and in doing so covered the aspect we had discussed in a very thorough and accurate fashion.

I was so impressed that I asked his permission to reprint it as a post for those that failed to see his response. He said it much better than I can!

Here is Jim's take on things:

I fully support Willard's answer on the role of artistic freedom in the photographic process.

Unfortunately, the majority of the public believes two myths:

1) That the camera alone creates the image...and that they too could produce the same image if only they had an expensive camera.

My response has always been that it's not the camera and equipment that creates beautiful photographs--it's the skill, knowledge, expertise, and experience of the person using the camera.

The bottom line is that an artist uses whatever tools they have at their disposal to exercise their creativity and express their vision. In the case of a painter, it is not the brush, pigment, or media upon which the artwork is produced that establishes and determines the aesthetic qualities of the finished painting. Rather, it is the hand of the painter who sets those tools in motion.

2) The second myth I frequently hear is posed as the question, "Are those colors real, or did you Photoshop them?"

Of course they're real; and, Yes, I use Adobe Lightroom to convert my digital RAW file into a readable image and to restore the contrast, saturation, and tonality that a digital sensor does not provide. Then, I use Adobe Photoshop to emulate the same processes and techniques routinely used in the chemical darkroom: dodging, burning, contrast masking, tonality adjustments, etc. The difference is that the digital darkroom provides much greater control of those techniques than what the chemical darkroom did. It's also a much more enjoyable environment to work in: no noxious chemicals.

The truth is that all film and all digital sensors record color, tone, contrast and saturation differently. Indeed, some films are capable of recording colors, luminosity, and tonalities that we do not see at the scene. A photographer chooses a particular film that will allow them to express their artistic vision for a specific scene. The choice is based on the characteristics of that film; i.e., color warmth or coolness, high contrast or low, high saturation or low, high speed or low, film grain or relative absence of grain upon enlargement, etc. The wonder of digital sensors and the digital darkroom is that one can apply the same characteristics of a particular film via exposure, film speed, image development (RAW conversion), and image enhancement (post-processing in Photoshop), etc. on the fly without having to change rolls of film.

What the public never realizes or acknowledges is that the *.JPG images produced by their digicams have been processed by the camera's onboard microprocessor to adjust the color, tone, luminosity, saturation, etc. in exactly the same way that is done in the digital darkroom (why do you think you have different settings such as "sports", sunrise/sunset", "landscape", "people", etc. available on your digicam?). Further, when they take their roll film to the drugstore for processing they don't realize that the development and processing in the chemical darkroom is done to a standard that produced a "pleasing" result for a test group of people. Frankly, anybody can have their film pushed or pulled during development, or developed and processed with different techniques to get different visual results.-----

The arguments and myths of the general public regarding what photography is or how it should be done are much like the Apple/PC or Canon/Nikon debates: non-starters. However, if you want to disagree with or discuss my statements above, critique or comment on my photography, learn or discuss what photography is really all about, or whatever...I would be happy to reply. Send your email to jwmoore@transient-light.com.

Be sure to visit Jim at both his blog and his website. He already has some excellent posts and photographs.

Great post Willard.. both you and Salty have got me wanting more... I need to make the time now to visit both the blog and web site..
Thanks for the nudge in the right direction..

The black and white conversion is also very lovely. I still like the color one below.. Hard to beat that awesome color of the sunrise.. Guess me and dot differ on the liking!! HA!!.. I enjoyed reading Jim's post and visiting his blog.. Thanks for sharing him!! :) :) Aloha, Renee :)

Sorry I haven't been around much lately commenting. Busy Busy!
I have several of Scott's books....I love them! And he is so funny!

I LOVE the B&W version...but I love the color too! Too hard for me to choose!!

And thanks for posting Jim's comments again....I agree totally with what he is saying!

eBambi
The models - photographers (but not only) social network.
Join now for free:
http://www.ebambi.com