Middle Creek Wildlife Management Area is located near Kleinfelter'sville in Lancaster County, Pennsylvania. The Pennsylvania Game Commission manages it primarily for waterfowl, although numerous other types of wildlife may be found.

Deputy Wildlife Conservation Officer, Anthony Carbaugh and I traveled there on Tuesday morning of this week in hopes of seeing the vast flocks of snow geese that visit here during the spring migration, but few of the birds were to be found. It seems most had moved on in the yearly journey to nesting grounds on the arctic tundra.

We did find several other species of waterfowl, but most were too far for good close-ups, even with the powerful telephotos. In a few cases, birds did come close enough for decent photography. 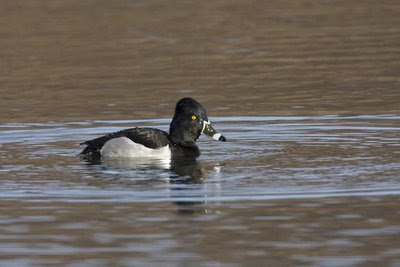 Male Ring Neck Duck
The ring neck duck is a common late winter, early spring visitor to Pennsylvania, but they are ordinarily not seen in large numbers. It seems that ring-billed duck would be a more appropriate name because of the prominent white ring behind the tip of the bill, but there is a narrow band of slightly different colored plumage near the base of the neck, from which the name is taken. The band is not visible in the above photo 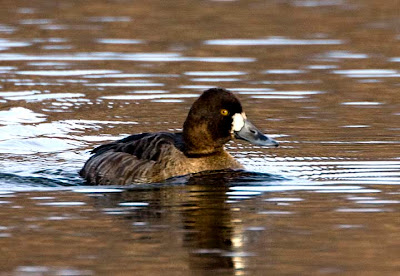 Female Scaup
Scaup also pass through Pennsylvania in the same period and look somewhat like the Ring Neck Duck, when one compares males to males and females to females, but notice how the Scaup has a broader beak with no ring near the tip. There are other differences as well, but these are the most prominent.
Posted by Willard at 10:02 AM

Great captures of the ducks! I am terrible at identifying these guys!

Saw the Scaup when I was in Fla in Feb. I was thrilled to see so many different ducks since it was the first time other than Mallards. Nice to see your Scaup so close, helps me with my id.

Great shots of the ducks. :)

Willard, I traveled there two weeks ago and didn't have much luck. I did freeze but came back with few shutter releases. It looks like you still came home with a couple of keepers.

Have you ever gone to Wildwood Lake in Harrisburg? Not the same size or type of place but it can still be pretty good on given days and the trip is not as long.

It is nice to compare species like this Willard. Some days are like that, we go out in hopes of having a good day and come back with nothing. Otherdays we think we are going to have a bad day and hit the jackpot. Thats what makes it all so interesting I suppose, you never know what to expect. :)

Hi Willard.. thanks for the lesson here... I saw the 'Ring Neck' and thought 'Scaup' right away.. I do not think we ger Ring Necks here... but this is one of those tips one never forgets.

Nice duckie shots. :) :) I have no clue about the various types of ducks but I enjoy reading your narrations.. :) :) Maybe I will head out this weekend and find some Hawaii ducks.. :) :) :) Wonder if that is a species.. Aloha, Renee :)

I am so amazed how many species of Duck you guys have got much more than us very ineresting Post TKS :)

Willard: Neat shot of the ducks, it seems all I see are mallards. I saw about 200 in a flooded field.

Nice photos. I like that you explained the differences between the ring neck and the scaup, which I had never heard of before.

I have brought back my hawks blog. Blogger saved the name for me. I have started posted in it again and have a lot of pictures yet to post.

This is one of the first times that I have seen you posting images of birds. Cool shots and the catchlight in the eyes is well captured.

Too bad you missed the geese. But these ducks are great!