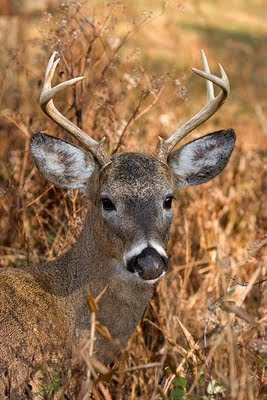 Whitetail Buck Poses In Rays Of Evening Sun
Many Pennsylvanians anxiously await the arrival of Monday morning, which is the first day of rifle deer season. In many areas, deer of any sex will be legal game as long as one has the proper licenses and follows the laws and and regulations. In other areas, the first week of season will be for antlered deer only. In all cases there are some type of antler restrictions. One should read the Hunting Digest carefully before going afield.

Sadly, many will not obey the rules and regulations, or hunt by ethical standards. Many of these persons will encounter Pennsylvania Game Commission Officers and their misconduct will result in charges being filed against them. 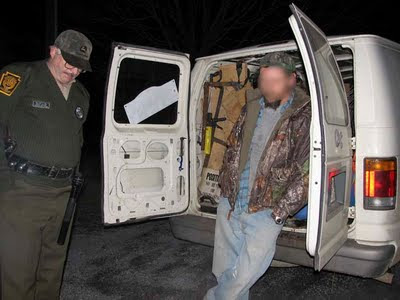 PGC Officials Arrest Game Law Violator: Photo Courtesy of C.Hill- Country Captures
The rut will effectively end on Monday as many of the bucks will soon be taken, and those that remain will become wary and difficult to see. I will not be hunting as I have not participated in the sport since 1997 or 1998, but I hope to be out there with my cameras documenting the wildlife and any crimes against wildlife that occur in my presence.


For more Camera Critters Photos from around the world, click Here!

good points - I have a friend who lost her son through this sport..sk

Willard, that PGC officer looks familiar or are my eyes really going bad. And yes I noticed you changed your about me photo.

Shane and I were back in SNP all day on Friday. It was productive and I think I now have him hooked also.

I hope you and your family had a great Thanksgiving, Brad.

Beautiful shot of the buck, Willard.

I did notice the photo changed. And it was a really nice photo of the buck.

Willard: So glad you captured the young buck and I hope he makes it through the hunting season. It is a shame that people can't obey the rules.

Nice catch! Mine is up. Hope you can drop by to view my very first entry. Your visit is a blessing. God Bless!

Great photo, I would like to see some of the poachers caught around here. We have found a place where deer carcass are just piled high in one spot, really gross.

It is a shame that these animals have to go through hunting seasons. We see the effect it has on them....they can't seem to eat for two minutes straight without looking all around to make sure the coast is clear.
It also angers me about how many people hunt illegally.
I hope all of your "friends" make it through. I know it is a tough time.
Very nice photo of a wonderful creature.

I love your commentary Willard, and agree with your views! I'm sure glad Penn has a few good people to protect the innocent!

Beautiful buck. I could only ever shoot with a camera, myself.

Luckily it is only a small portion of sportsmen community that are violators or poachers.

I have enjoyed reading this blog over the last few years, but your conversion from biologist to activist/enforcer can be seen pretty clearly, which I find interesting and a little off-putting....a great example is your use of the phrase, "many will not obey the rules and regulations." "Many" means "a large number" which is obviously subjective. And I would agree with you that 1 poacher (or one unsafe shot) is too many. BUT relative to the tens of thousands of legal hunters, I believe you are talking about dozens, maybe hundreds? of outlaws.....

I don't think that 1% or even 2% covers "many." It's clear that your opposition to hunting grows over time....odd to see, I guess.

Swamp Thing,
I have had a lot of negative experiences in this area in the last few years, which inspired this particular post. For example the buck featured in this post was part of a bachelor group which ranged from two to three bucks. Another 8pt was his constant sidekick, he vanished about Sept, 16th, when no season was in, perhaps natural dispersal, but likely not. The buck featured in the photo was shot with a firearm in early October when no firearm season was in, but he did recover. Last year, roadhunters came during the second week of deer season and fired at the deer from a motor vehicle. They missed that particular deer but I found a fawn that had been shot earlier and left lay, and blood spots in the field where two others had been shot and removed.

It likely is only a few individuals in the overall scheme of things, but when one confronts these problems on this scale, it does give one a somewhat "under siege" feel about the situation.

I do realize I am biased as I concentrated on the road hunters , the night shooters, and those who illegally hunted over bait in over twenty years of working part time conservation law enforcement for the PGC.

I don't have any figures to back this up but I think you are coming from the position of an honest sportsman who hangs out with other
ethical sportsmen and do not realize how many of the type of individual that I am talking about that there is, but it is certainly much higher than dozens or hundreds relative to the tens of thousands of legal hunters.

We would have to further break outlaws down between those who were basically decent hunters, who could not resist a tempting opportunity, or committed a minor infraction of regulations, and those who are true wildlife criminals. The number would be astonishing if we were to include the first class.

Great response and your final point is a good one - akin to going 64 in a 55....still illegal, rarely malevolent or enforced. I still don't think the number of infractions would approach 10%, but you're right, we are still talking about thousands, not dozens, of people.

That's horrible that you live in an area that is so productive for a resource (deer) that apparently some folks think that they can just take an animal (or many animals) on their own terms.

Hard to convince those types of folks that game laws exist partially to ensure that a healthy supply of game animals persists from year to year. Not a difficult concept. In Maryland, policing is aggressive, but it's as much wanton waste as it is poaching....last year someone left 75 dead geese in a pile next to a state road.

And hunters wonder why they are under siege from anti-hunters....sigh....