As Summer Winds Down

August, the cardinal flower is in bloom, the grain fields are harvested, with only the corn yet remaining.  Fall is just around the corner. As August nears its' end the fawns still have spots. I have not yet seen a buck that has shed his velvet, although most if not all of the bull elk have already done so, and the bugling is starting.

Whitetail bucks are also showing the first signs of the approaching rut.  Surprisingly this young three point and a spike have been lip-curling frequently, but I have not yet filmed a rack buck doing so this year.

So far the rack bucks are still feeding in the same spots I have seen them all summer, but sightings are not nearly as consistent now and soon most of the younger bucks that have not yet dispersed from the family groups will do so.


During early and mid-summer the bucks are attracted to farmer's grain fields and for a time after it is cut they continue to graze in the stubble.  If grasses such as clover and alfalfa are planted in the stubble they may continue to graze on this indefinitely, but in other cases they will likely move on to more desirable food sources.  They may be difficult to see in the fields after the acorns fall in a year with a substantial mast crop.

Wild Turkeys are also seen in the meadows from time to time as they feed on weed seeds and insects. In this case I pressed my old Canon FD 85-300 f4.5 lens into service.  It is mounted to the GH3 with a Novoflex adapter.  I used this lens extensively for a short period on the GH2 and GH3, but I liked the auto-focus on the 100-300mm Lumix for mid-range general purpose work and it could not compete with the 500mm F4 for extreme long range work, so it spent all of the summer on the shelf until I decided to use it one evening last week to re-evaluate my impression of it.  Bottom line is it is OK, but I don't think I am going to be using it a lot. 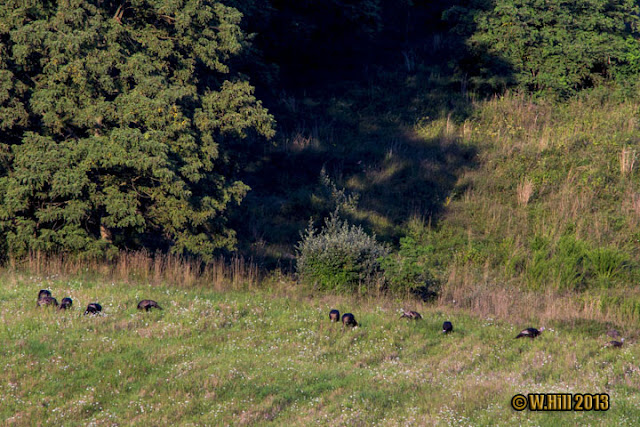 The GH3 and the 500mm deliver respectable results at unbelievable ranges, but there is still nothing quite like having the bird in close, but that requires either a lot of luck or a lot of hard work and patience as they are very shy.

One could reasonable ask why I used ISO 640 in good light, but the situation developed quickly and I forgot to check the ISO.  The good news is that 640 looks very good on the MK III and does not diminish the quality.

Originally published at Pennsylvania Wildlife Photographer by Willard Hill.
Posted by Willard at 11:24 AM

Beautiful images. I love seeing your pictures of wildlife since this a subject I don't get to capture much.

Nice picture of the male gobbler!

Hi!
Lovely Pictures, the gobbler looks great, pity we dont have them in our nature.