There was great weather for last week's Elk Expo which was held at Elk Country Visitor Center near Benezette.  A steady stream of visitors passed through the grounds throughout the day on Saturday. It  is my understanding that there was not the overflow crowd that was expected, but it was still a successful day.  According to reports, most were able to park at the visitor center and the shuttle from Benezette received little use.

After spending the majority of Saturday and  Sunday morning and most of Sunday afternoon at the Expo, it was time for some serious elk photography, but unfortunately the skies were murky that evening as a front started to move through the area. Most of the bulls I found this evening had already shed their velvet or it was mostly gone with strips of velvet dangling from the antlers.  I did see a few  that had not yet shed; however.

As dusk settled over the countryside, I found a bachelor groups grazing and at one point two briefly locked antlers. 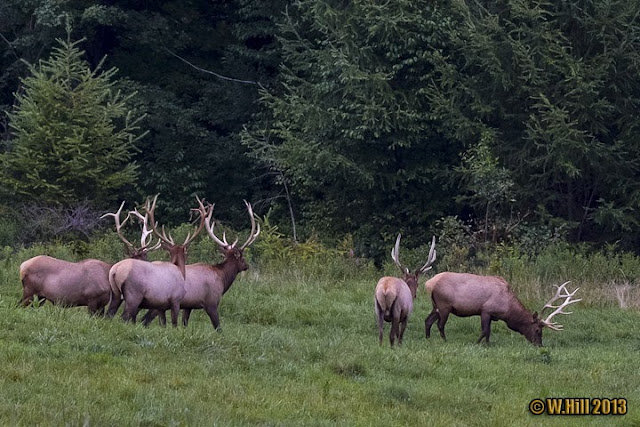 Ron "Buckwheat" Saffer was also photographing in the area and I found him photographing three young bulls nearby.  These bulls were really into the sparring and Buckwheat got several still photos.  At this point I was taking video with the GH3 and 70-200mm f2.8 lens.  As sparring and fighting are ideal subjects for video I didn't take any stills of this encounter so the following images  are video still captures.

Soon the bulls stopped sparring and moved away.  The other bachelor group was still in the meadow behind me. Most of the bulls were grazing, but I  picked out two that were in an alert pose and took a few frames with the5D MK III  and the 500mm at ISO 6400.

We saw another small bachelor group somewhat later.  It was nearly dark by then, but I still took a few photos at ISO 12800 and 25600, but that is for another post, if I decide to process them.

Originally published at Pennsylvania Wildlife Photographer by Willard Hill.
Posted by Willard at 11:57 AM

These are such beautiful animals.

Unfortunately I didn't make it up to the expo. Beautiful photographs, the rut will be here before you know it.

Great Pictures!
Interesting with the expo.