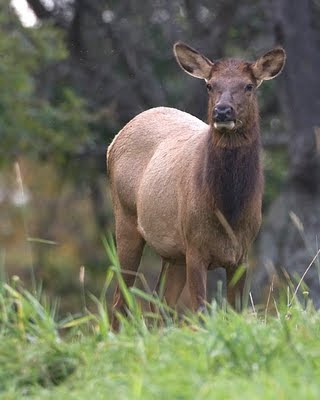 Antlerless Or "Cow" Success Ratio Was 61%

Based on the kill statistics from the recent Pennsylvania elk season, some are insisting that killing an elk is far from a sure thing, and that Pennsylvania elk do offer a challenging hunt.
60 licenses were issued for the 2009 season. 21 bull tags and 39 cow tags were issued. 20 bulls and 24 antlerless elk were harvested for a total of 44 animals. These figures include the special conservation bull tag that was auctioned off by the National Wild Turkey Federation. (that individual did take a bull during mid-October).

Writing in PGC News Release #116-09 , PGC Executive Director, Carl Roe said, "This year's overall success rate was 73 percent, which is down slightly from the past year, which I believe that this can be attributed to the improved food conditions this year throughout the elk range."
Source: News Release #116-09 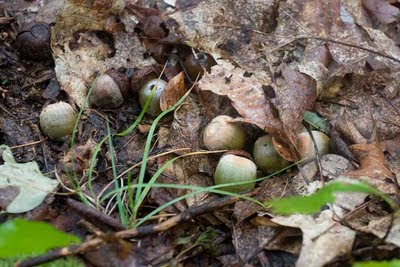 It may not be immediately obvious, but a 95% success rate on bulls is only one animal away from a 100% success rate. The much lower antlerless success rate brings the overall average down to 73%, but it raises an important consideration.

If the relatively low antlerless success rate can be explained by a more abundant mast crop causing the animals to spend more time in wooded areas instead of the open and edge areas where they are ordinarily found and resulted in them being spread over a wider area, then we must ask why the bull kill was not impacted nearly as much by these same conditions and instead was just one animal shy of 100%.

There are likely several contributing factors:
It may be possible to have a fair chase hunt in the more remote areas, but the statistics and explanations as presented do not prove that all or even most Pennsylvania elk are "as wild as any" or that the hunt is difficult and challenging. Many claim that the elk season is mostly about population control, but it seems obvious that many, if not most persons who participate in the elk season, are primarily interested in killing the large bulls. 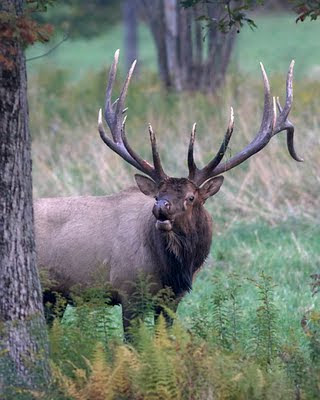 Mature Bull-A State Treasure!
A mature bull elk is one of our state's natural treasures. It takes six or seven years for a bull with the right genetic makeup to reach the stage where it is truly impressive and all too often they are killed at that stage. Remember, One person can kill him, but once, while thousands may enjoy viewing him time and time again.

We need a larger No Kill Zone, possibly surrounded by a population control only zone, with no bull tags issued for that area. This should not be viewed as a threat by the hunting industry, but should be a win-win situation for both factions, as the majority of the elk range would still be open to elk hunting, but more if not most of the bulls that frequent the tourist areas during the rut would be protected.

Some will counter that this is not the case as bulls may travel long distances to visit the breeding grounds on Winslow Hill and then return after the rut is over, but that is a subject for another day along with a more definitive look at what an expanded No Kill Zone should entail.
Posted by Willard at 3:14 PM

I like your stance on this Willard! Thanks for speaking out!

As ussual I agree with you 100% Willard. That is an awful good success rate and one I would take any day if I still hunted. I would also be the same way in hiring a guide if I had an antlered tag but would not want to spend the additional money for a guide on an antlerless tag. Most of these hunters want an antlered elk to have the antlers and or head mounted along with the meat. I really feel that unlike whitetail hunters these hunters are out more for a rack than the meat. I am not putting them down for that just stating what I think is fact.

I like you know that population control of the elk is not done by killing bulls but by killing cows. The one thing that struck me odd during the rut was the number of bulls compared to the amount of cows. Photographing the rut out west the cows far out number the bulls but that was not the case in Elk county this year for me.

The stash of acorns is very abundant this year, but as you pointed out why would the cows and bulls differ on where and what they want to eat. Just makes no sense to me.

Your take on these statistics makes sense to me, Willard. The hunting industry in Arkansas likewise tries to portray elk hunting here as a legitimate and challenging big game hunting experience. It's actually more like a game park shoot in my opinion.

Thanks for the insight on this Willard. I like your idea of a larger no kill zone. With the new viewing area project it would serve the public well. If they needed to have a hunt in this protected zone in the future, they could open it for control purposes on an as needed basis.

It's only natural for hunters to want to kill the biggest trophy animals thus exerting more effort when a practically once in a lifetime tag is in hand. Having hunted nearly all of my life I fully understand the sentiment however to maintain a quality elk viewing experience we do need changes to the current no kill zone.

The Game Commission did take a significant step in the right direction with the way the bull tags were allocated across the zones this year wresulting in a lower bull kill in and around the tourist areas compared to that of recent years.

The killing of these acclimated bulls does no good for the public image of hunters and guides. As you stated changes to the no kill zone could be a win win situation for all.

Compared to any other species, this is a PHENOMENAL success rate. Turkey and deer both hover in the 25% range.